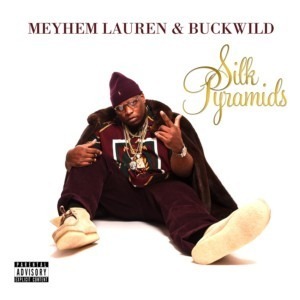 (Queens, NY) – Meyhem Lauren & Buckwild are set to release their album Silk Pyramids on May 27th via Thrice Great Records (Chambermusik) distributed via Universal Music Group. This will be the first national release for Meyhem who previously released countless street projects to critical acclaim. This album will surely be one of the pivotal projects in rap for 2014, and will undoubtedly be another proud moment in the history of NYC hip hop. The entire album is produced by multi-platinum producer Buckwild (Big Pun, Notorious B.I.G., Black Rob, etc.) Meyhem Lauren is in the vein of the resurgent NY sound personified by everyone from Action Bronson to Troy Ave.

Meyhem Lauren A.K.A. Laurenovich is the epitome of rugged elegance. He was born and raised in Queens, New York and his music personifies inner city street life from an intellectual and somewhat unconventional standpoint. Meyhem’s career started by making appearances on J-Love mixtapes and eventually hosting them. Since then he has put out numerous solo projects. A few of his latest projects include, “Raw Cashmere,” “Mandatory Brunch Meetings” and the critically acclaimed “Respect The Fly Shit,” produced by Harry Fraud and Tommy Mas. Besides working on his own material Mey is also known for touring and making music with close friend and frequent collaborator Action Bronson.