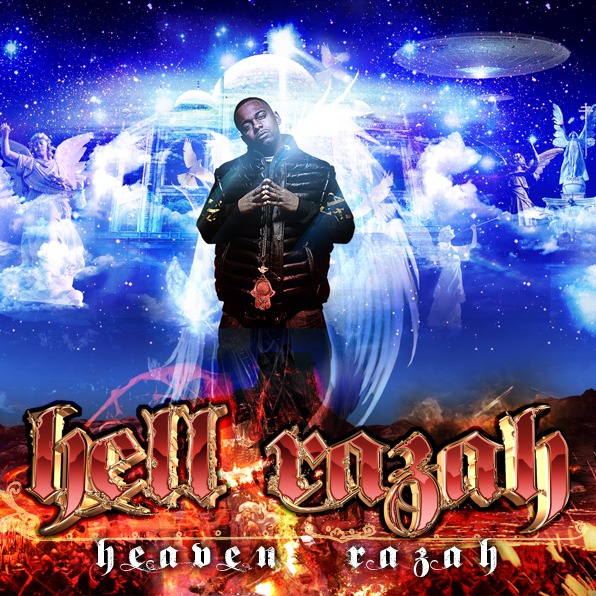 Brooklyn-bred MC Hell Razah finished his new album Heaven Razah in late March, and hoped to release the album this summer. The Wu-Tang Clan affiliate and Sunz of Man man member released his acclaimed debut Renaissance Child in 2007, and fans have been eagerly awaiting his follow-up ever since.  What fans were not anticipating was the health emergency that landed Razah in the hospital in April, just after he finished recording the album.  With the support of a still-recovering Razah, Nature Sounds is now proud to announce that Heaven Razah will be in stores everywhere on September 28, 2010.

Heaven Razah marks a rebrith for Razah, who has re-fashioned himself as a modern day hip-hop prophet, spitting spiritual wisdom about the apocalypse, the presence of demons, mortality, and the afterlife.  In light of recent events, his words sound even more prophetic.  “It was like a premonition.  I was thinking about these themes, and my destiny was already in my brain, but I didn’t even know it,” explains Razah in his first comments since his being hospitalized. “This is my testimonial. It’s like I’m seeing the future through music.”

In recent years, Hell Razah has become one of the most prolific artists in hip-hop’s underground, releasing albums with 4th Disciple, T.H.U.G. Anglez, Blue Sky Black Death, and his supergroup, Black Market Militia (Razah, Tragedy Khadafi, Killah Priest, and Timbo King). While Razah enjoys collaborating with his peers, he held off on guest spots for Heaven Razah, with only R.A. The Rugged Man, Timbo King, and Shabazz The Disciple making appearances. “I wanted to show that I can hold my own,” he explains. “To me, features look like mixtapes. If you go back and look at classic albums like Illmatic, there weren’t a lot of features.” Backing up Razah’s prophecy is an impressive collection of knocking instrumentals from the likes of Havoc, Ayatollah, Bronze Nazareth, 4th Disciple, and Mathematics.

In one more twist of fate, the album will hit stores just a few days before Razah’s birthday, which falls on October 1st.  “There is no better birthday present I could get than sharing this album with my fans,” says Razah.  “There’s a lot of soul in this album.”  In a final message to supporters, Razah gave an update on his status.  “Right now, I’m in rehabilitaion, doing physical therapy everyday to get back to 100%. I’m writing rhymes too, and the ideas are flowing. That’s my spiritual therapy.”