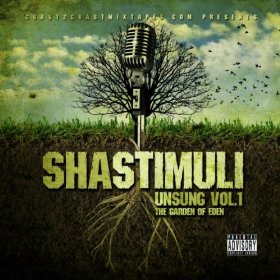 The word Unsung is a good way to describe the musical career of Brooklyn emcee Sha Stimuli. His perseverance in hip hop is something many people can relate to and since his release of 12 mixtapes in 12 months in 2008, Sha Stimuli has been on roll ever since. in 2009, he released his acclaimed debut album My Soul To Keep and now he brings us Unsung Vol. 1: The Garden of Eden.

Unsung Vol. 1 is a loose story about the career of Sha Stimuli and some of stories (some personal) throughout his life. Skits are perfectly placed between specific songs that link with the situations in his career. Unsung doesn’t carry the dark undertones like My Soul To Keep did. The album starts off with the intro track “The Stir” and that sets the tone for the entire album. Rapper Big Pooh (of Little Brother) assist Stimuli on the banger “Believe Me”. The highlights keep coming on the next few songs “Who I Am” has Stimuli throwing hilarious lines out like “You know they won’t me underground like a ninja turtle/ thats why i Grimace at these clowns but I ain’t big & purple/ if Family Matters i’m Stefan Urkell fu*king Laura once I slaugher her I switch back like BITCH I’m Urkel”. And then the clever track “Game Over” has Sha putting video games and board games all into a verse. It’s a lot more just rapping on Unsung unlike his previous releases and Sha Stimuli’s lyricism is Unsung’s greatest strength.

Another stellar song, “Insanity” features Stimuli rhyming with no hook, just straight rapping. Halfway through the album every song has hit it’s mark. The only borderline filler may be the song “Effortless” featuring Prince EA of St. Louis. The song itself isn’t that bad but just doesn’t seem to fit on the album. But perhaps one of UNsung’s strongest tracks is the Mickey Factz assisted “Televised Revolution”. Both Stimuli and Mickey Factz trade bars throughout the powerful song.

The albums closer, “The Garden” speaks on appreciation for everyday life. “Adam & Eve, they lived in a paradise, but didn’t know so they gave it to their appetite, then had to go/ & they looked back at it & they saw what they had there. Somedays I do that with my past years”.  Unlike any song on the album, you really can hear and feel the sincerity in the words of Stimuli on this song. The tracks somber production sets the perfect mood for the song.

As a whole Unsung Vol. 1 is a very great album. Overall production is above average but leaves room for improvement at the same time. It’s scary to see what Sha Stimuli could do over even stronger production. Fans of Stimuli should be more than pleased after hearingUnsung Vol. 1 and eagerly awaiting what Sha Stimuli thinks of next. If your looking for music with substance, clever lyricism and originality, then Unsung is what you need.

HipHopDX Review by by The Company Man

There’s a Shakespearean distinction to Sha Stimuli’s interim release, Unsung Volume 1 (The Garden Of Eden): a talented, privileged artist aware of his personal impediments, ultimately succumbing to an expected fate. Talented because of his lyrical prowess. Privileged because he literally grew up in the heart of east coast golden era Hip Hop, watching his brother, Lord Digga, produce three tracks on Notorious B.I.G.’s classic, Ready To Die among others. Hearing him opine for an hour and 20 minutes on the plight of under-appreciation, detailing the reasons he’s unsung, then defiantly adhering to those reasons drives home the tragic irony. Rocking a lyrical holster loaded with spirituality, extended metaphors and rewind worthy rhymes, the Brooklyn emcee’s astute personal awareness is Unsung’s unfortunate self-fulfilling prophecy.

“Yeah, I drift / I sway / I bitch / I complain / I talk about brain / I over mention my name…”, Stimuli spits on “Game Over,” one of many flame-laced cypher rhymes that — while separating him from Rap’s mediocrity — leaves him redundantly rapping about, well, rapping.  “I hate talking about rap in my raps when I rap / But sometimes I get reflective on a track,” he kicks nine cuts later on “The Garden,” explaining why he inevitably raps about Rap so often. “Saviour” and “Who I Am” drown in a flood of prolonged bars of braggadocio hopelessly working to refresh each track’s stale soundbed. Sha then cops to his garrulousness on, “Am I Different” (“And he’s still doing long verses…”). “Am I Different” is brilliant, actually. Abnormal’s 9th Wonder-esque backdrop is one of the album’s least offensive audial offerings, and Stimuli masterfully intertwines a relationship narrative (“I touched her like I loved her / But when she was leaving I hugged her like a brother”) through a viscerally ill extended metaphor that defiantly responds to past criticisms:

“That’s why I’m doing this / No I’m not bitter / Lincoln owned slaves / Lincoln owned niggas / You looking at a hypocrite driven ignorant spitter / Acknowledge I’m the shit / So what I got you thinking hard / Driving in your whip / Waiting for the singing part / I be doing that too / Swear to God, yo, I’m just like you / don’t judge me…Tell me am I different?”

Unsung’s strength is in it’s narratives. Stimuli’s storytelling abilities easily outshine most of today’s mic-holders. “The MILF Song” tackles the emotional conundrum of jumping into relationships with women with children. Lines like “Kids names on her so I’m beating and reading” and “Son still learning how to potty / Got the nerve to tell me last night ‘I heard you hurt my mommy’” are not only riotously hilarious, but righteously relatable. And his encapsulating foray into the universal tug of war between pursuing work and pursuing women on “The Mirror” is enough to wish you could reach through the playlist and dap him up in concurrence. Chasing relationships takes just as much commitment as paper chasing and, like always, Stimuli spits the truth.

The irony is that, although the Chambermusik Records emcee is astutely aware of the polarizing qualities of his albums — extra long verses, suspect production, rappity raps for Rap’s sake — those qualities inexplicably undermine Unsung. He says he’s “Gotta get my beats together” (“Insanity”), on an album littered with second-hand production. The Astronote-produced, “Believe Me,” with it’s plodding bassline and repetitive keys — sounds like a Dr. Dre bootleg and still somehow ends up as one of the LP’s better beats. Mell & D’s “Televised Revolution,” feels like a wanna be Black Milk production. “Effortless,” produced by Dams, is a generic throwback to the mid 2000s when rappers rapped over Rock beats with sped up Soul samples shreeking in the background.

“And my hooks could use some work,” he admits on “Insantiy,” while scattering comatose choruses all over the project. After 18 songs of seemingly endless verses and movie snippets and interludes of Stimuli giving insight to his journey — redundantly covering essentially the same three topics (career, relationships, braggadocio) — “Pardon my preaching and correlations to The Garden of Eden / A dead horse I’m beating,” rings unfortunately true. His supreme mic skills end up lost in translation, immersed in the murk of entirely too much filler, dramatically jeopardizing replay value.

Unsung is either insane, or insanely poetic. As he proved on his 2009 debut album, My Soul To Keep, Sha Stimuli is one of the most profound lyricists of the present. His rhymes are often otherworldly, strong enough to carry an LP flooded with beats that are the exact opposite. He’s aware enough to literally detail why he’s unsung, not change any of those characteristics, and somehow still craft an impressive two time listen: a rare feat for any artist, this album’s tragic ending.