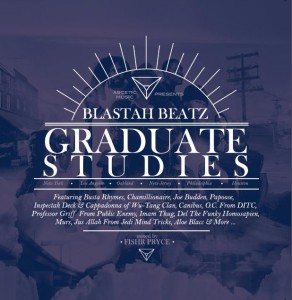 Hailing from Portugal, Blastah Beatz has been making noise on the international hip hop scene for a few years now. Having created soundscapes for legends like Kool G Rap, Busta Rhymes and Inspectah Deck to name a few, Blastah is gearing up to release his debut production album ‘Ph. D in Beatmaking’ in the Spring of next year. However, before he obtains his degree, the producer known for his pounding drums and banging bass must show how well he’s been studying the craft for the past four years; so on October 25th he will release ‘Graduate Studies’ under French label Ascetic Music. The project, mixed by Fishr Pryce, features unreleased songs, freestyles and remixes as well as some of Blastah’s previous work. Guest emcees on the 21-track CD include Joe Budden, Cappadonna, Chamillionaire, Papoose and Canibus, among others.

Check out the promo video and the tracklist below.