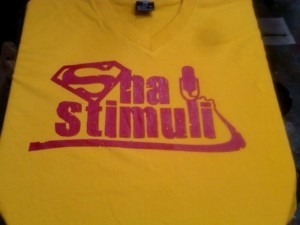 Check out this Monday’s entry titled @ The Movies!

By the way you can buy Sha Stimuli gears on his website.

One day I went to the movies and there was a couple there with a baby that had to be around 4 days old. The baby got going with the cries and yelps about 20 minutes in and I couldn’t help but think about what would possess these people to throw caution to the wind and bring out their brand new offspring instead of finding a sitter or something.

I get it, The Karate Kid remake or Saw 13 or whatever the hell I was seeing is pretty important and the fact that you guys just spat out a seed shouldn’t deter you from living the life you’ve always lived. Maybe these were the sitters and they were just like,

“Look we Fandangoed these tix and they’re not going to waste, all we gotta do is take turns going out the movie with the baby and just fill each other in on what we miss, cool? “

“Ok…But do you think we may disturb the other people if the baby cries? I don’t want to be an inconvenience.”

And that was that.
Coming attractions are like a movie within a movie. You can always hear someone with a loud  “I’m seeing that joint” whisper if it’s a good one. The loud whisper concept still baffles me but more importantly, the number of attractions has gone up to like 6 or 7 nowadays. They make you forget what you came to see. Things usually even out though because the odds are that you’ll also forget what coming attraction was so good as well.

I purposely ate a nourishing meal before getting to the cinema but it never fails that the popcorn smell hypnotizes me. And then I’m calculating how much money I want to throw away to satisfy an unhealthy, finger food fetish. Once I give in, I know I’m about to spend sneaker money in one outing.
I hear theaters don’t make any money off of ticket sales, which is so backwards to me. That’s like a restaurant selling food, then giving the money only to the people in the kitchen and they split it with the farm that raised the animals…and Kelsey Grammer (he’s behind everything). Anyway this is why popcorn and a drink add up to around 42 dollars. And if you try to buy a small they offer you a medium for a quarter more. Then you ask to see the medium size and it’s like a tub-o-corn that you can’t really finish. And your potnah that you’re with doesn’t want any…

Until you get the 20 dollar small with a big ass drink with mad ice. Then they’re all in your popcorn killing it before the movie even starts and then 20 minutes of attractions later, either your popcorn has dwindled to the butter less, lukewarm, underdeveloped kernels on the bottom or your drink is an empty ice block and now you have a cotton mouth.

I always tell them to put butter in halfway then continue filling and then put butter on top but who am I kidding? That’s not butter, butter doesn’t look like that, it never has, and yet without it, that movie popcorn just isn’t the same.
I swear I would have been better off finding a stranger that got one of those large popcorns and since he can afford it, “just pour a little in my hand, I know you’re not gonna finish that bruh, thank you kindly”

Have you ever witnessed people clapping after a good movie? Man I hate to be a part of that. Applause in the movies! This isn’t a play. For whom do you clap my fair people? If this was Madea Comes out of the Closet…on Broadway, I would understand. The Social Network was great, Inception was confusingly entertaining but I’m not just going to put my hands together for a screen. Jennifer Hudson got a standing ovation in a crowded movie theater when I went to see Dreamgirls. Yes, they stood up…I take nothing away from her performance but it’s not like she was backstage to come out and take a bow. We couldn’t tag her in the applause, I say it was a waste but what do I know?

I hate when movies let out and everyone has to go to the bathroom at the same time. Urinal rules get broken and dudes are elbow rubbing, then we’re forced to pee in the stalls (I always pee in the stalls), hand washing gets skipped. I try to either dart in there right before the credits because I swear I just know when a movie’s over or I just accept my loss and let everyone else handle their biz and wait it out.

Either way, my effort gets thwarted sometimes and as I’m washing my hands getting ready for the Excelsior dryer that’s going to make the skin on my hands vibrate, some kind gentleman asks me what I thought of the film. Really? I’m Roger Ebert now? You care what I think? And now we must share ideas as I return the favor and ask you for your review of the film…no sir. I just came for the popcorn and the bathroom. He tried to tell me his opinion but I think he was the baby holder guy trying to get filled in on what he missed now that I think about it. So I’m glad I hit him with a smile/head nod/door-grab combo and got outta there. I’m gonna go somewhere and invent The Anti-Social Network. “Take yo baby home and get ya netflix on homie.”