Lost Children of Babylon – Tower of Babel will be in stores on June 21st, 2011, via Chambermusik Special Products/Fat Beats Distribution. 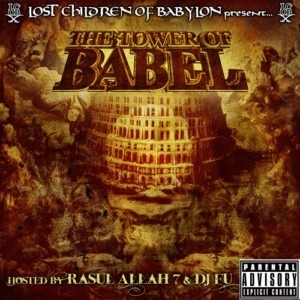 Be sure to cop that flavorful new mixtape/street album by those Philadelphia Hip-Hop Heretics we know and love called The Lost Children of Babylon. Originally affiliated with Jedi Mind Tricks, they have expanded into a lyrical army, many of whom are featured on here. For those listeners tired of the same-ole,same-ole you will love this tape, as it combines the best underground sounds of holycore, revolution, with a sprinkling of conspiracy rap. Featured are Rasul Allah, Richard Raw, Cosmic Crusader, Jon Murdock, Atun Sen Geb, Lex Starwind, and others.
Listen here: