KDB & St. Peter – Within The Solace NOW IN STORE! 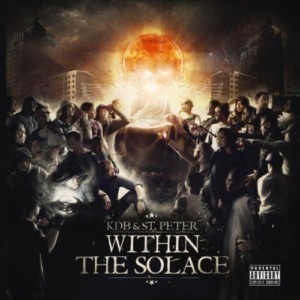 ‘Within The Solace’ is a collaborative concept album created by KDB and St. Peter. KDB has been involved heavily within the Hip Hop scene for over a decade, reaching many feats such as JUNO nominated projects, nationwide tours and regular video rotations on Much Music. St. Peter has been producing beats and sewing projects together for a few years with his Wu-Tang afillations, Building music for Hell Razah, Shabaaz The Disciple, Daddy Rose, Vendetta Kingz and many more. Not to fail mentioning his follow up project with Killah Priest. Get ‘Within The Solace’ here! Check out the track list below.