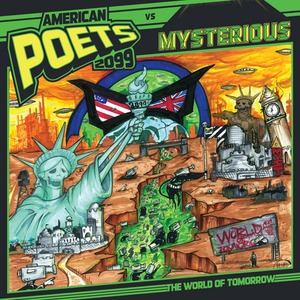 American Poets 2099 is a West Coast Hip-Hop group that have been making noise for awhile now. The most prominent members being two idiosyncratic legends named Holocaust (Warcloud) and C-Rayz Walz. Filling out the crew are Pro the Leader, who since he was young, has been known as the central protege of Holocaust, along with his partner in crime Nova-Kane, Bootface, Atlantis Scrolls, and Ace Gauntlit. After the world is flooded over & the continents reemerge The British group Mysterious consisting of Weapon-X, X-P, Excalibur & Blackksun join forces with the poets to save what is left of Hip-Hop. Hard hitting production & that classic back to back rap style keeps the Mysterious Poets at the forefront of the future’s Hip-Hop scene. Nothing is lost in translation & there are no borders to what these two groups can collectively create. The American Poets 2099 Vs. Mysterious: The World Of Tomorrow is tomorrow’s Hip-Hop today! Get the album here: