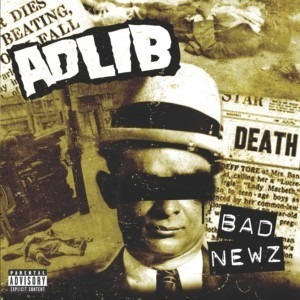 Although “Bad Newz” is AdLib’s debut album he is music industry veteran having toured many times over with the likes of Jedi Mind Tricks, La Coka Nostra, Battle Axe and Madchild to name a few.  Adlib has built his fan-base from the ground up on the road with hip hop greats.  He regularly headlines his own shows based off of releasing his own mixtapes and music videos.  “Bad Newz” conjures up a nostalgic sense of golden era hip hop with a strong dose of aggressiveness that is more characteristic of La Coka Nostra and the Battle Axe collective.  The album contains features from Vinnie Paz (of Jedi Mind Tricks), Slaine (of La Coka Nostra), Madchild (of Battle Axe), General Steele (of Smif-N-Wessun), Reef the Lost Cauze, Shabaam Sahdeeq and more. Buy it now at the following spots: